Following the Paratriathlon in the morning the afternoon saw Jill, Richard Green and myself take on  the relay event at Hyde Park. I would do the swim, Jill the bike and Richard the run. Our team name: Dawson’s Green Team.

We all had our challenges to face in completing this. For my part I would be happy just to navigate my way around the 750m swim course and not get lost or get us DQ’d. Jill was perhaps a bit nervous about cycling at a big busy event like this, although she’d been looking good in training. Richard was wondering how fast he could get around the 5k run and had also been preparing by putting in a few miles.

Lining up at the swim start some of the officials were wondering where my guide was. I assured them I’d be fine and would just follow everyone else. That plan failed – straight off the start I appeared to be leading (oops!). I backed off and found a few people to stalk to the first turn 300m or so out (or a lot further than I can see). This worked until the people I was with suddenly stopped dead in the water and I was alone again. I started to make my way back down the Serpentine in what I thought was roughly the right direction. In all honesty I was wasn’t 100% confident, not helped by the fact I was still alone and couldn’t see anyone in front or nearby. Having doubted myself I stopped to take a better look around and was greeted by the welcome sight of the giant swimmer coming out of the water installed for the London Olympics. 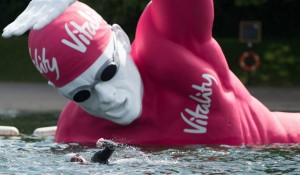 I knew where I was then, and, although I couldn’t see them, I knew the last 3 bhouy’s taking me to exit ramp weren’t far. I made it out alive and in an OK time (14 minutes). After a long run to transition it was over to Jill and I could have a rest… 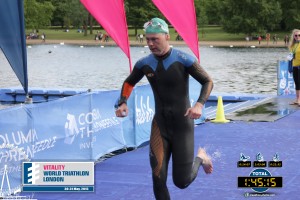 Jill had originally set herself the target of getting under the hour for the 20k bike leg so wasn’t  overly pleased to learn a few days beforehand that it would actually be 22.5km. The course would also be very busy (maybe 240 cyclist’s at any one time) with tight U-turns to negotiate. It would’t be a walk in the park (walking is slower than cycling anyway!). If that wasn’t enough, Jill clocked up 35,000 steps earlier in the day supporting me at the Paratri race…that’s more than she clocked up walking 10 miles through the Brecon Beacons recently – not surprising she said she was knackered before even turning the pedals! 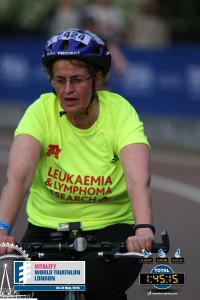 Jill got round in a great time of 1 hour 3 minutes and would have easily been under her target time had been 20k. She looked like she was moving well and seemed confident amongst the other riders. The only problem came at the dismount line where she suffered the cyclist’s curse of calf cramping, meaning she needed a little help to get off the bike, much to the ‘aahh’s’ of the sympathetic crowd. Great effort! 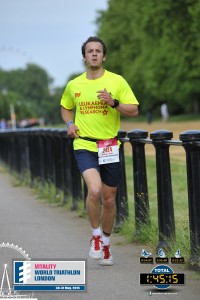 Richard headed out of T2 onto the 2 lap run course and in all honesty we didn’t see him again until we met him at the finishing chute on the blue carpet to run in together. He’d clearly had a good run though clocking 21;32 to finish the job off well! 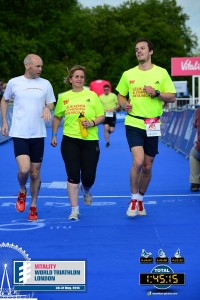 Finishing on the blue carpet

Over-all it was a great team event and a fun event to do. We finished 11th – click here for the results. 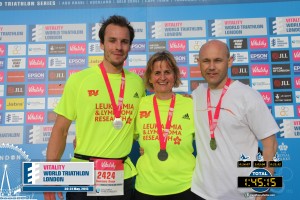 We also raised a bit of money for Leukaemia Research which is a good cause. Special mention to the young guy called Nathaniel working at KFC at Birchanger services where we stopped on our way home. He donated a tip he’d been given the day before – top man!

Jill’s already registered her interest in the relay next year when the World Series event moves to Leeds! 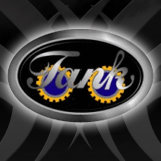